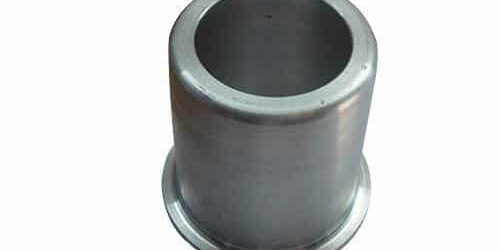 Deep drawing: pressing the sheet into a hollow part (the wall thickness is basically unchanged)
Deep drawing process: the material on the plane (flange) is transferred to the side wall of the cylinder (box), so the outer dimensions of the plane change greatly
Drawing coefficient: the ratio of drawing diameter to blank diameter “m” (deformation degree from blank to workpiece)

Three: The first drawing coefficient of flanged cylindrical parts is affected by the following factors

Note: The upper limit is taken when the drawing times are calculated by area, and the lower limit is taken otherwise. These excess materials will gradually return to the flange in subsequent deep drawing, causing the flange to become thicker but to avoid head cracking, and the localized thinning area can be corrected by shaping. Therefore, it is very important to strictly control the drawing height of each drawing.

In the process of deep drawing, there is friction between the material and the die. At this time, there are five friction forces:

1: Analysis of the causes of “A, B” neck and head pulling cracks:

2: Analysis of the causes of the “C” head fillet cracking:

Reason: The transition from the first pumping to the second pumping is too large, and the material cannot withstand the pressure of the instantaneous conversion and ruptures.
Countermeasure: sharpen the head of the first pumping punch (as shown in the picture)

5: Analysis of the causes of wrinkle repair methods caused by pumping:

1) When repairing the crack, first check the deformation of the first pumping flange – to maximize the conversion of the flange material into the material of the side wall.
2) To determine the drawing height of each drawer, the height of the punch should be used as the criterion (and make a record) when confirming the draw height of each drawer. *Based on the height of the punch in the last draw (if the height of the existing product is OK); the last second draw should be 0.10~0.20mm higher than the last draw and the first few draws should be gradually reduced.
3) Check the finish of the working surface of the die.
4) When repairing the crack, it is necessary to comprehensively consider and carefully analyze the cause, and must not “medicate the head with a headache, and treat the foot with a pain in the foot”.