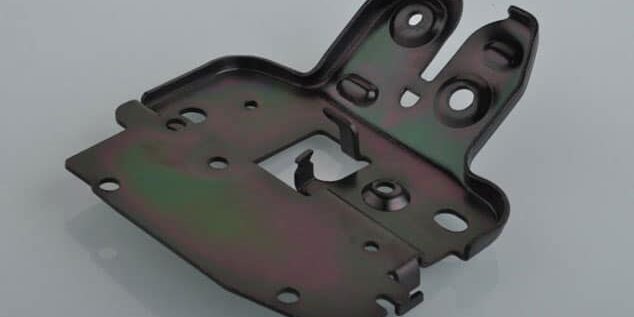 Stamping process is a process method of metal forming. At the same time, it is also called one of the four major processes of automobile manufacturing together with welding, painting and final assembly. Therefore, without stamping, the car may still be the same as the previous banging and banging. The level of making 3 cars a month Oh~ Today, let’s learn the definitions of the 72 technical concepts of stamping with you, so that you can use them in your future work.

The workpiece is a punched piece that has completed each process specified in the process document.

Process parts are blanks or punched parts that have been stamped, but need to be further stamped.

The upper part is to send the process part into the mold for further stamping.

The upper part device is a device that feeds the process parts into the mold.

The top dead center is the upper end point of the up and down movement of the press slider.

The bottom dead center is the lower end point of the up and down movement of the press slider.

Burrs are sharp protrusions on the edge of the punched section after punching.

The rough surface is the rough section where the punched part is torn.

The neutral layer refers to a layer of material that has zero strain in the bent stamping.

The double-sided gap is the gap from one side to the opposite side or the sum of the gaps on both sides.

The ejection is to make the punched process (sequence) parts out of the mold.

The ejection device is a device that makes the punched (process) parts out of the mold.

The glossy surface is the bright section of the blanked part that is cut out.

The clamping and feeding device is a device that uses the clamping, loosening and reciprocating actions of a mechanical, pneumatic or hydraulic press to feed raw materials into the die.

The step distance is the distance that each feed of raw material can be used for multiple punches.

The gap is the difference between the corresponding dimensions of the matched punch and die or the gap between them.

A single-sided gap is a gap from the center to one side or a gap on one side.

Blanks are unstamped and mostly used as raw material for one stamping. Blanks are sometimes called blanks or stock.

Coils are raw materials in rolls that can be used for multiple punches.

Sheet stock is a sheet-like raw material that can be used for multiple punching.

Strips are strips of raw material that can be punched multiple times.

The draw ratio is the inverse of the draw factor.

The lugs are the ear-shaped protrusions on the upper mouth edge of the drawing piece.

Feeding is the feeding of raw materials into a die for stamping.

The feeding device is the device that feeds the raw material into the mold. Common feeding devices include roller type, clamp type, hook type, etc.

The hopper is a bucket-shaped container with a mechanism that automatically orients the forming punches out.

The bend radius is the inner radius at the bend of the punch.

The expanded drawing is a plane process part graphic corresponding to the forming punching part.

Arching is the name of the phenomenon in which the surface of the punching piece is arched and uneven.

Wrinkling is the name of the phenomenon in which the flange of the deep-drawn part produces wavy wrinkles.

A trough is a trough-shaped channel that sequentially enters or leaves the die.

The hook feeding device is a device that uses the reciprocating hook to extend into the hole to drive the raw material into the die.

The sorting device is a device that arranges and stacks the punched pieces.

Nesting is the die design process to complete the layout drawing. Sometimes the layout diagram is also referred to as layout.

Die sticking is the name of the phenomenon in which the working surface of the die is bonded to the punching material.

Chipping is the name of the phenomenon in which small pieces of punch or die edge peel off.

Minimum bend radius refers to the smallest bend radius at which a successful bend can be made.

The slump surface is the plane of the blanking part with a slump edge, that is, the opposite side of the burr surface.

Die tryout refers to the experimental stamping after the die assembly is completed to evaluate die performance and punching quality.

The roller feeding device is a device that uses a pair of rollers to clamp the raw material and feed it into the die. The feeding of the material is accomplished by the periodic rotation of the rollers.

Blanking is a stamping process that uses a die to separate some materials or process parts from another part of materials, process (process) parts or waste. Blanking is a general term for separation processes such as cutting, blanking, punching, punching, grooving, sectioning, chisel cutting, edge trimming, tongue cutting, slitting, and refurbishment.

Slicing is a stamping process in which material is partially but not completely separated along an open contour. The material that is cut to separate is in or substantially in the same plane as it was before separation.

Trimming is a stamping process that uses a die to trim the edge of the forming process part to make it have a certain diameter, a certain height or a certain shape.

Tongue cutting is a stamping process in which the material is partially but not completely separated along the open contour. The partially separated material has a certain position required by the workpiece and is no longer on the plane it was in before separation. cut off

Cut-off is a stamping process that separates material along an open contour, and the separated material becomes a workpiece or process piece.

Flaring is a stamping process that expands the opening of a hollow or tubular part outwards.

Punching is a stamping process that separates waste material from a material or process piece along an open profile that forms a notch whose depth does not exceed its width.

Grooving is a stamping process that separates waste material from a material or process piece along an open profile that is groove-shaped and whose depth exceeds its width.

Punching the center hole is a punching process in which a shallow concave center hole is formed on the surface of the process part, and the material on the back has no corresponding protrusion.

Fine blanking is a kind of smooth blanking, which uses a fine blanking die with a toothed blanking plate to make the entire section of the punched part completely or basically all smooth.

The continuous die is a die with two or more stations, and the material is fed into one station successively with the stroke of the press, so that the punching piece is gradually formed.

A single-process die is a die that only completes one process in one stroke of the press.

Combination punching die is a universal and adjustable complete set of punching die that gradually forms various punching parts according to geometric elements (straight line, angle, arc, hole). The outline of the flat stamping generally requires several sets of combined dies to be punched in stages.

Embossing is a stamping process in which a punch is extruded into one side of the process part, forcing the material to flow into the opposite pit to form a protrusion.

Embossing is a stamping process that forcibly partially extrudes materials and forms dimples, patterns, characters or symbols on the surface of the process parts. The backside of the embossed surface has no protrusions corresponding to the dimples.

We employ documented procedures for every step in the manufacturing process from initial program launch through steady-state production in order to ensure consistent performance. We engineer our processes to produce the desired results, monitor those results, and use what we learn to regularly refine our processes as part of our commitment to continuous process and efficiency improvement.

Many of our customers have been with us for 5-8 years or more. Year after year, they experience zero late deliveries and zero returns.

What are the materials of metal parts
October 6, 2022

What are the skills of sheet metal stamping dies
October 2, 2022