The failure of fuel metering unit valve and its treatment method

You are here:
Uncategorized 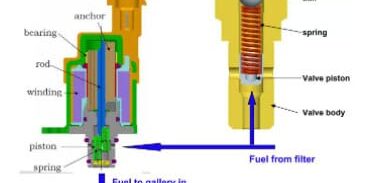 The fuel metering valve is a proportional solenoid valve, usually installed at the fuel inlet position of the high-pressure fuel pump, and controlled by the PWM signal output by the ECU; the ECU controls the opening of the fuel metering valve by changing the duty cycle of the PWM signal to control the entry plunger The amount of fuel to control the common rail pressure. The top dead center diagnostic instrument has all functions.

For the normally open fuel metering valve, the default working state is normally open, and the flow is the largest in the non-energized state, and the current characteristics of the normally closed type are just the opposite. The overflow valve is a multi-stage mechanical valve, used to adjust the oil delivery pressure of the oil pump, which is essential to ensure the normal lubrication and oil return of the oil pump. When the oil pressure at the inlet of the fuel metering valve is too high (usually 0.1MPa), the overflow valve will open the oil return port, allowing the fuel to return to the inlet of the input pump or the fuel tank.

Different models, depending on the type of fuel metering valve used and specific control strategies, have slightly different fault phenomena and fault code definitions, but the basic troubleshooting ideas are the same.

There are several common failure modes of fuel metering valves.

Overflow valves also have some common failure modes, such as:

Some methods can be used to troubleshoot and reduce unnecessary losses. Check beforehand that the battery is sufficiently charged; the vehicle power supply lines and fuses are normal; all connectors are normal, and there are no loose connectors or rusty pins. You can also use some testing tools to troubleshoot, such as multimeters, diagnostics, jumper boxes, and wires.

The principles to Design of Metal stamping parts
October 26, 2022